The State of Kernel Exploitation

The typical write-what-where kernel-mode exploit technique usually relies on either modifying some key kernel-mode data structure, which is easy to do locally on Windows thanks to poor Kernel Address Space Layout Randomization (KASLR), or on redirecting execution to a controlled user-mode address, which will now run with Ring 0 rights.

Relying on a user-mode address is an easy way not to worry about the kernel address space, and to have full control of the code within a process. Editing the tagWND structure or the HAL Dispatch Table are two very common vectors, as are many others.

However, with Supervisor Mode Execution Prevention (SMEP), also called Intel OS Guard, this technique is no longer reliable — a direct user-mode address cannot be used, and other techniques must be employed instead.

One possibility is to disable SMEP Enforcement in the CR4 register through Return-Oriented Programming, or ROP, if stack control is possible. This has been covered in a few papers and presentations.

Another related possibility is to disable SMEP Enforcement on a per-page basis — taking a user-mode page and marking it as a kernel page by making the required changes in the page level translation mapping entries. This has also been talked in at least one presentation, and, if accepted, a future SyScan 2015 talk from a friend of mine will also cover this technique. Additionally, if accepted, an alternate version of the technique will be presented at INFILTRATE 2015, by yours truly.

Finally, a theoretical possibility is being able to transfer execution (through a pointer, callback table, etc) to an existing function that disables SMEP (and thus bypassing KASLR), but then somehow continues to give the attacker control without ROP — nobody has yet found such a function. This would be a type of Jump-Oriented Programming (JOP) attack.

Nonetheless, all of these techniques continue to leverage a user-mode address as the main payload (nothing wrong with that). However, one must also consider the possibility to use a kernel-mode address for the attack, which means that no ROP and/or PTE hacking is needed to disable SMEP in the first place.

Obviously, this means that the function to perform the malicious payload’s work already exists in the kernel, or we have a way of bringing it into the kernel. In the case of a stack/pool overflow, this payload probably already comes with the attack, and the usual tricks have been employed there in order to get code execution. Such attacks are particularly common in true ‘remote-remote’ attacks.

Big pool allocations, on the other hand, take up one or more pages. They’re used for anything over the sizes above, as well as when the CacheAligned type of pool memory is used, regardless of the requested allocation size — there’s no way to easily guarantee cache alignment without dedicating a whole page to an allocation.

Because there’s no room for a header, these pages are tracked in a separate “Big Pool Tracking Table” (nt!PoolBigPageTable), and the pool tags, which are used to identify the owner of an allocation, are also not present in the header (since there isn’t one!), but rather in the table as well. Each entry in this table is represented by a POOL_TRACKER_BIG_PAGES structure, documented in the public symbols:

One thing to be aware of is that the Virtual Address (Va) is OR’ed with a bit to indicate if the allocation is freed or allocated — in other words, you may have duplicate Va’s, some freed, and at most one allocated. The following simple WinDBG script will dump all the big pool allocations for you:

As previously presented, this API requires no privileges, and only in Windows 8.1 has it been locked down against low integrity callers (Metro/Sandboxed applications).

With the little snippet of code below, you can easily enumerate all big pool allocations:

Obviously, it’s quite useful to have all these handy kernel-mode addresses. But what can we do to control their data, and not only be able to read their address?

You may be aware of previous techniques where a user-mode attacker allocates a kernel-object (say, an APC Reserve Object), which has a few fields that are user-controlled, and which then has an API to get its kernel-mode address. We’re essentially going to do the same here, but rely on more than just a few fields. Our goal, therefore, is to find a user-mode API that can give us full control over the kernel-mode data of a kernel object, and additionally, to result in a big pool allocation.

This isn’t as hard as it sounds: anytime a kernel-mode component allocates over the limits above, a big pool allocation is done instead. Therefore, the exercise reduces itself to finding a user-mode API that can result in a kernel allocation of over 4KB, whose data is controlled. And since Windows XP SP2 and later enforce kernel-mode non-executable memory, the allocation should be executable as well.

Two easy examples may popup in your head:

Ultimately, #2 is a lot easier, requiring only a few lines of code, and being much less inconspicuous than using sockets. The important thing you have to know is that NPFS will prefix our buffer with its own internal header, which is called a DATA_ENTRY. Each version of NPFS has a slightly different size (XP- vs 2003+ vs Windows 8+).

I’ve found that the cleanest way to handle this, and not to worry about offsets in the final kernel payload, is to internally handle this in the user-mode buffer with the right offsets. And finally, remember that the key here is to have a buffer that’s at least the size of a page, so we can force the big pool allocator.

Here’s a little snippet that keeps all this into account and will have the desired effects:

Now all we need to know is that NPFS uses the pool tag ‘NpFr’ for the read data buffers (you can find this out by using the !pool and !poolfind commands in WinDBG). We can then change the earlier KASLR-defeating snippet to hard-code the pool tag and expected allocation size, and we can instantly find the kernel-mode address of our buffer, which will fully match our user-mode buffer.

Keep in mind that the “Paged vs. Nonpaged” flag is OR’ed into the virtual address (this is different from the structure in the kernel, which tracks free vs. allocated), so we’ll mask that out, and also make sure you align the size to the pool header alignment (it’s enforced even for big pool allocations). Here’s that snippet, for x86 Windows:

And here’s the proof in WinDBG:

Voila! Package this into a simple “kmalloc” helper function, and now you too, can allocate executable, kernel-mode memory, at a known address! How big can these allocations get? I’ve gone up to 128MB without a problem, but this being non-paged pool, make sure you have the RAM to handle it. Here’s a link to some sample code which implements exactly this functionality.

An additional benefit of this technique is that not only can you get the virtual address of your allocation, you can even get the physical address! Indeed, as part of the undocumented Superfetch API that I first discovered and implemented in my meminfo tool, which has now been supplanted by the RAMMap utility from SysInternals, the memory manager will happily return the pool tag, virtual address, and physical address of our allocation.

Here’s a screenshot of RAMMap showing another payload allocation and its corresponding physical address (note that the 0x1000 difference is since the command-line PoC biases the pointer, as you saw in the code). 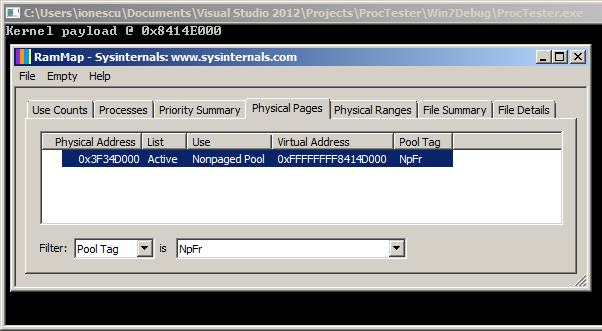 Now, for full disclosure, there are a few additional caveats that make this technique a bit less sexy in 2015 — and why I chose to talk about it today, and not 8 years ago when I first stumbled upon it:

1) Starting with Windows 8, nonpaged pool allocations are now non-executable. This means that while this trick still lets you spray the pool, your code will require some sort of NX bypass first. So you’ve gone from bypassing SMEP to bypassing kernel-mode NX.

2) In Windows 8.1, the API to get the big pool entries and their addresses is no longer usable by low-integrity callers. This significantly reduces the usefulness in local-remote attacks, since those are usually launched through sandboxed applications (Flash, IE, Chrome, etc) and/or Metro containers.

Of course, there are some ways around this — a sandbox escape is often used in local-remote attacks anyway, so #2 can become moot. As for #1, some astute researchers have already figured out that NX was not fully deployed — for example, Session Pool allocations, are STILL executable on newer versions of Windows, but only on x86 (32-bit). I leave it as an exercise to readers to figure out how this technique can be extended to leverage that (hint: there’s a ‘Big Session Pool’).

But what about a modern, 64-bit version of Windows, say even Windows 10? Well, this technique appears to be mostly dead on such systems — or does it? Is everything truly NX in the kernel, or are there still some sneaky ways to get some executable memory, and to get its address? I’ll be sure to blog about it once Windows 14 is out the door in 2022.